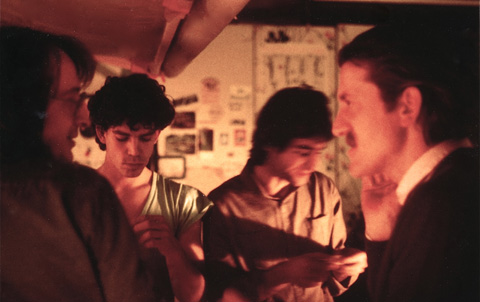 The pioneers of electronic music came in a variety of guises. Some whipped up a Milky Way of cosmic sounds. Others explored the hypnotic power of robotic repetition. Still others experimented with conceptual sound patterns. And then there were Yello. Inspired by the Dada spirit of their hometown, Zurich, as well as records by the likes of John Coltrane, Pink Floyd and Californian mavericks, the Residents, every single sound that came out of their machines told a story. Some were absurd, some bizarre, some just plain funny. Whatever the story was, it also had swing and – “oh, yeah!” – it was dead catchy.

„Solid Pleasure“ promised Boris Blank and Dieter Meier with the title of their debut album in 1980. Forty years later, their fourteenth album, “Point”, still delivers just that, solid pleasure. Even now, Blank speaks with childlike wonder of the joys of creating paintings and stories with sound. Meier is just as passionate when he describes the good fortune of two such different creative minds running into each other: “It is a great privilege to discover such a harmonious symbiosis in one’s life.”

It all began with a „double catastrophe” for Blank, recalls Meier. Meier, already a well-known conceptual artist, had linked up with a punk band. Blank thought they were appalling. He himself spent every spare minute working on his idiosyncratic brand of electronic instrumentals. A mutual friend quite liked these but thought they needed a voice. Against the protestations of Blank, who did not want a singer, and certainly not a Meier, the friend sent Meier round anyway. The results, lo and behold, were not quite as awful as Blank had anticipated. Not much later, Blank and early Yello member Carlos Peron boarded a plane to San Francisco. Young and fearless, they headed straight for the office of the Residents to hand over a copy of their demo cassette. Blank: „They said, wow, this is seriously outstanding, we’d like to offer you a contract.”

Their first single, “Bostich”, mysteriously became a huge hit in New York’s Afro-American underground club scene. From there, the unmistakable Yello sound – a collage of styles from everywhere – travelled the world. Albums like “You Gotta Say Yes To Another Excess“ (1983), „Stella“ (1985), „Pocket Universe” (1997) and „Toy” (2016) hit the upper regions of the charts. Their hit singles “The Race“, „Oh Yeah“ and „I Love You“ still frequently turn up in film soundtracks on both sides of the Atlantic. All sorts of voices, from Shirley Bassey to Billy Mackenzie and Stina Nordenstam, have abandoned themselves to the Yello groove in the band’s studio high above Lake Zurich. Three years ago, Blank and Meier finally conquered their fear of the stage with a mini tour that was brilliantly captured on a DVD, „Live in Berlin“. They say you can‘t teach an old dog new tricks. Yello have never followed the rules. They still don’t.