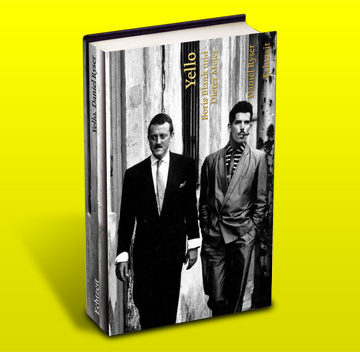 There was a time in the seventies when Boris Blank worked as a typewriter salesman. During the night, he toiled away on the sounds that became his musical compositions. Meanwhile Dieter Meier was making performance art and screaming his lungs out in different punk bands.

A record shop owner introduced them to each other and this was the moment that Yello was born. This Swiss musical duo not only had worldwide success and sold millions
of records. With their radical, never-heard-before music, they were able to achieve what
only few bands can dream of: They created a new musical style.

To develop this book, Daniel Ryser let Boris Blank and Dieter Meier describe how Yello came into
being, how all of a sudden the music world turned their eyes and ears to Zurich, and how it really was to party with Ringo Starr and compose a hit with Shirley Bassey.

When musicians like Moby, the DJ legends David Morales, Carl Craig and the Hip Hop Great Grandfather Afrika Bambaataa heard that a book on Yello was being written, they made sure that they contributed to the action in order to make it clear why Yello’s music exploded like a bomb on the club scene in the beginning of the ‘80s.
Exclusive Release: Mean Monday, a new Yello track, can be downloaded from a code inside the book.
“Yello are not rock stars. They are artists.
Anton Corbijn

“Did I say that Yello are from Switzerland? They do not sound Swiss. They belong to no country or continent. There will be a lot more to say about them.”
Diedrich Diedrichsen

“I want nothing more to do with Yello.”
Shirley Bassey

Daniel Ryser, born in Chur in 1979, was a national editor with WoZ for several years.
In 2008, he won the Zurich Journalist Award. Ryser was also a co-founder of the notorious political blog «Nation of Swine» and has been writing for Das Magazin since 2010. Echtzeit Verlag has also published his book „Feld-Wald-Wiese. Hooligans in Zürich“.